SMART AS THE NEW LOCAL.

Following article is a set of observations of the human behaviour within a topography formed by network signals over a physical socio-urban fabric. The ability of the network signals to connect to a world wide web through a generic transactional device, like a mobile phone, has dictated certain human behavioral conditions that was unimaginable before its advent into the everyday routine of the physical world. This article follows the idea of 'smart as the new local' and suggests 'the Diogenes proposition' as one of its conditions.

//Thought experiments//
If a tree falls in the forest and no one is there to hear it, does it make a sound?
Are there Pokemon monsters in places with no internet connectivity?
A QR code lost in a no wifi zone is just a black and white pattern

There are many men in London, you know, who, some from shyness, some from misanthropy, have no wish for the company of their fellows. Yet they are not averse to comfortable chairs and the latest periodicals. It is for the convenience of these that the Diogenes Club was started, and it now contains the most unsociable and unclubbable men in town. No member is permitted to take the least notice of any other one. Save in the Stranger's Room, no talking is, under any circumstances, allowed, and three offences, if brought to the notice of the committee, render the talker liable to expulsion. My brother was one of the founders, and I have myself found it a very soothing atmosphere.
-Sherlock Holmes in "The Greek Interpreter"

Prologue
Diogenes club was a place co-founded by Sherlock Holmes’ brother Mycroft Holmes. It was a club, that came with all the connotations that such a place should provide, albeit the social interaction. It was a place of common commune, yet the silence was the only thing that they shared. The layout of the Diogenes club is described as a set of chairs assigned to each member, the number of chairs corresponding to the number of available nooks in the main to room. 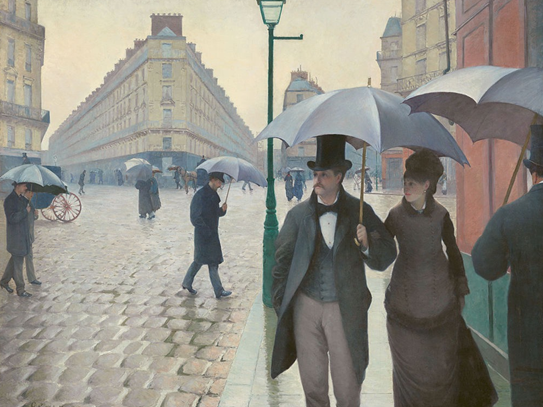 Gustav Cailbrouttes “Paris street, Rainy day” provides an utopian image for urban life. The painting has been the poster image to describe the notion of an urban experience and the role of the flaneur within its discourse. A flaneur is an ideal author to provide efficient vocabulary to discuss urbanism and leisure. Being “A gentlemen stroller of the streets”, a flaneur consumes time to remain fascinated about the street life and manufacture ways of drowning in its romance.

Ezra Pound’s poem “In a station of the metro” and Ernest Hemingway’s description of Paris as a ‘movable feast’, provide instances of poetic explosions of an ardent flanuer romancing the city. Both Ezra Pound and Ernest Hemingway, along with other writer like T.S.Eliot and Scott Fitzgerald were frequent visitors of a small book shop on the left bank in Paris, called “Shakespeare and Co.”

Sylvia Bleache founded Shakespeare and Co. in 1919 as a book store and a lending library, “Its books were considered high quality and reflected Beach's own taste. The store and its literary denizens are mentioned in Hemingway's A Moveable Feast. Patrons could buy or borrow books like D. H. Lawrence's controversial Lady Chatterley's Lover, which had been banned in Britain and the United States. It also served as the writers’ home away from home, postal address, and when they were desperate a loan service."

‘Shakespeare and Co.” features prominently within the conversations about Paris during its moments of cultural flourish. Within a city of poetic proportions, it allowed time for the agents who had poetic capabilities to find their words. A time station in Paris. 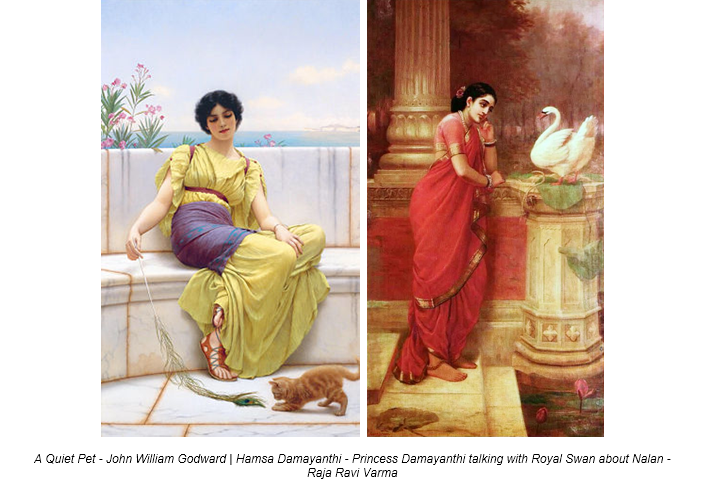 To be a Romantic at the turn of the nineteenth century was in part to break from the growing tyranny of clock time to sleep late, ramble aimlessly through the city, refuse to live by the “statistical clocks” that governed economic life… The time discipline of the pendulum clock took the informal flow of experience and nailed it to a mathematical grid. If time is a river, the pendulum clock turned it into a canal of evenly spaced locks, engineered for the rhythms of industry .

‘Conspicuous Leisure’ positions time as a privilege and a luxury for the leisure class. It is an asset of people unburdened by daily labor and is practiced as a “non-productive consumption of time”. ‘Conspicuous consumption’, a much more well-known term of Veblen, is defined as a form of conspicuous leisure. This provided a material vocabulary to the time accumulated by the leisure class.

The period between 1880 to 1920 introduced three key inventions that enabled architecture to contain the experience of a flanuer; the elevator, air conditioning which created "artificial interiors" for the first time, and the escalator. Together, these three inventions conspired together to keep the user within the loops of its parent corridors. Each loop specifically designed to maximise the time spent by the user around products and services of consumption. An architectural blueprint for consumerism, with its efficiency measured by the number of footfalls retained within a loop/hour.

The architecture of consumption has subsequently changed from a room full of material abundance to a screen of infinite options. The Xiami Redmi 1S phone, which had been launched in 2014 on an online shopping website, sold approximately 40,000 pieces in 4.2 seconds. Such numbers are unimaginable within the traditional notions of transaction and consumption. The traditional places for consumption, for instance, a book store that once took pride in its collection and the quality of its books, now has to compete with screens that could accommodate infinity within them. 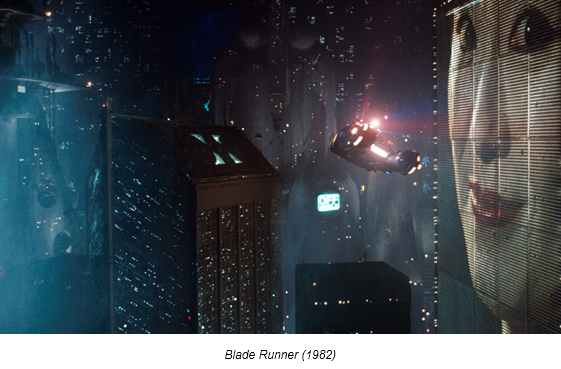 A kid with a mobile phone is assured to remain within the radius of the wifi signal. Display screens with internet connectivity are perceived as transactional objects of infinite leisure. The sci-fi narratives, whose moral obligation remains in being ahead of its time, propagated the idea of every potential surface within the city to host animated visuals. The notion of any object being intelligent is propagated through its ability to communicate through a display screen. A display screen on a washing machine, renders it smart, registers its presence within other physical objects that are networked by an omnipresent virtual fabric.

The omnipresence of the Internet allows the click of a button to be translated into a following, an opinion, a support, a retort or a tangible social gesture. Scrolling is a method of looking around and clicking is method of making a selection. If logging in is a tool for social relevance, then the topography of internet signals and networks define the locus of social transactions.

Cows and buffaloes play a significant character within an Indian Landscape. Unlike the cattle peppered on the polder landscapes of Europe, the presence of cattle within the Indian landscape is intimate. In Amaravati village (population is approx. 2000; and 445Kms from Bangalore), cattle is considered as an undivided part of the family, often reflected by the position it’s given within the typical architectural layout of the household. In 2012, however, this position within the architectural layout of quite a few households was empty. The number of cows in the village had drastically decreased. This created a material gap for the custom of worshipping small cow dung mounds during Dussera, a festival of religious significance. This subsequently led to people lining up outside the few households that still reared cattle in order to ‘borrow’ cow dung for worship. Cattle was no longer an household entity at the grassroots level in India (but packaged milk that got delivered door-to-door was). The means of consumption has drastically shifted from a process-based-practice to the one based on consumerism.

Would packaged cow-dung plug the gap that consumerism has created within daily rituals of embedded culture? 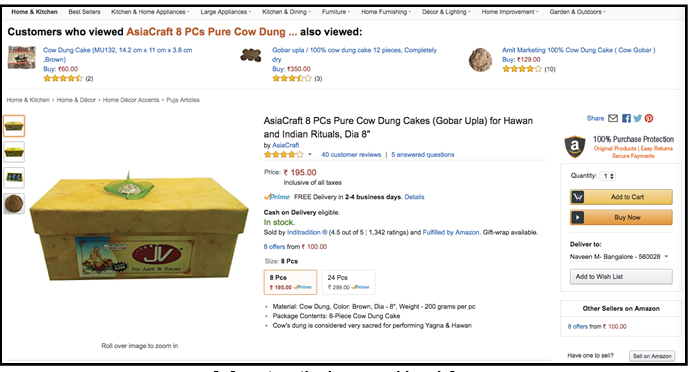 Le Corbusier’s modernist visions aligned with Jawaharlal Nehru, India’s first Prime Minister (1952), when he commissioned the former to design the new city of Chandigarh as "a new town, symbolic of the freedom of India, unfettered by the traditions of the past”. However, in the words of The New Yorker in 1955, “It is an event of global import, and it may cause talk for centuries". Le Corbusier designed an orderly and modernist grid system in a country whose urban centres are ecologies of human density precisely separated from motorised movement.

In June 2015, The Government of India launched the Smart Cities mission as an urban renewal and retrofitting program with a mission to develop 100 cities all over the country with a budget of $15 billion approved by the Indian Cabinet. Currently, 31% of India’s population lives in cities which also generate 63% of the nation’s economic activity. These numbers are rapidly increasing, with almost half of India’s population projected to live in its cities by 2030. But the current Indian populace has high fidelity towards its traditional customs and practices that has shaped its local ecologies and built environments for millennia. While Chandigarh was a 'global import' of ideologies within expectations of being Avante-Garde, the smart-cities-mission grapples with the schizophrenic reflexes of existing local-fabrics being transformed into aspirational poster images of 'something-smart'. 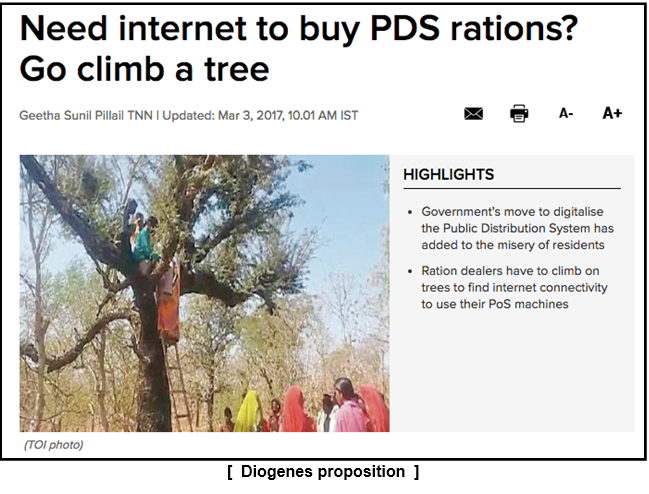 At many centres here, it is a common sight to see men and women perched on tree branches, waiting for hours for their turn to get their fingerprints and biometrics verified by the PoS (point of sale)+ machines. That done, they climb down and walk back miles to the ration shops where they get in another queue to collect the provisions they have bought.

At these places, ration dealers have to climb on trees to find internet connectivity to use their PoS machines. People living in small settlements like Merpur, Chibarwadi, Malwiya Khakariya, Peepla, Bhuridebar, Beran, Palcha, Umariya, Samoli have to wait daily for hours to get their biometric verification to purchase ration items like sugar, kerosene.

Climbing trees to find internet connectivity is another form of a common human behaviour of wandering around in the middle of the mobile phone conversation trying to find an opening to a place that 'has network signal' to sustain a presence. The notions of space that are determined by internet connectivity is making places for social transaction, albeit on a tree top. The topography of human habitation or localities is broadly shuffling between places with network connectivity and 'no network'. The lines between the two define the nooks and corners of places of network silence (A Diogenes club) and network access (World Wide Web). The World Wide Web, a place that affirms individual presence within a platform of instant access. The Diogenes club, a probable place where roses are smelt and not shared.